Phew! Knocked out a couple of old project posts and now I can finally post the one I'm actually proud of!

So this is the story of finding my beloved mid century dresser/credenza. I had been wanting one for agesss. But dang it, I could not find a cheap on on Craig's List so I contented myself with drooling over ones online and hoping that maybe someday I'd find one magically at Goodwill for super cheap. Well, my waiting finally paid of. The street behind our's has a bunch of apartments and one day while driving by I saw a whole pile of junk in front of one of them, out by the sidewalk. So naturally, I stopped to look because junk piles are my fav. And I saw this dirty, junky old dresser underneath a huge 200lb TV. But there was no "free" sign. And no indication that they weren't just in the process of moving.

So I got all creepy. I stalked this thing out... for like a week.

And finally after driving by twice a day for 4 days I saw a the owner and asked if he would sell it and he said he'd give it to me for $20! SCORE! So me and Chaser dollied this beast down the street to our house. To say Chase was as excited as I was would be the biggest lie in the history of the world, but hey, he let me buy it. 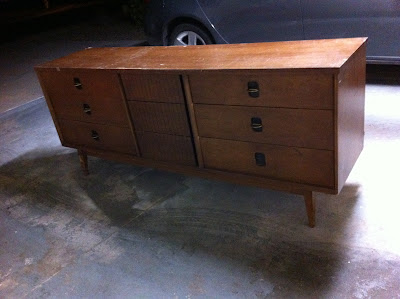 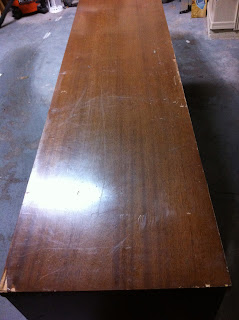 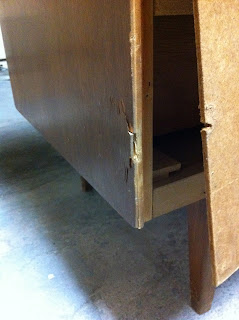 I realized a few things after we got it home. While the dresser is solid wood, the tops, sides, and drawers all had a thin veneer on them - still it was at least a real wood veneer. But I realized there were too many chunks on the top and sides to be able to stain those. Instead I ended up filling them with wood filler.

After giving the top, sides, and legs a light cleaning and sanding, I primed them with a coat of Zinsser oil based primer. I'm super glad I did, even though it was a little annoying to clean the brushes afterward. It just gave it a really good, strong base. I then painted two coats of regular latex white off-the-shelf paint. I used a foam roller for both the primer and first coat of paint, but then used a brush for the second coat or paint. I also used Floetrol which I am now a huge fan of! It is so perfect for our dry, warm weather because it slows down drying time and helps prevent brush strokes. It worked wonderfully!

For the drawers, I used Citristrip to carefully scrape off the stain of the veneer. I was so worried about going through it, so it took me a while to strip. Then I sanded the drawers lightly and cleaned out all the cracks (those middle drawers have grooves in them).

I mixed some stains we already had to get the color. It came out exactly how I wanted, which is a miracle because that never happens on my projects. I had a small can of English Chesnut and added maybe 5 or 6 tablespoons of Ebony to it. I applied the stain with a foam brush and left it on for 20 minutes before wiping it off with a clean rag. After the drawers had dried 24 hours, I put on two coats of poly to seal them. Note to self: spray poly is not a good idea and regular poly (at least for this project) does not need sanding in between coats.

To finish, I added two coats of clear Briwax to the painted surfaces and it's done! I really love how it turned out and how it looks in our little living room. 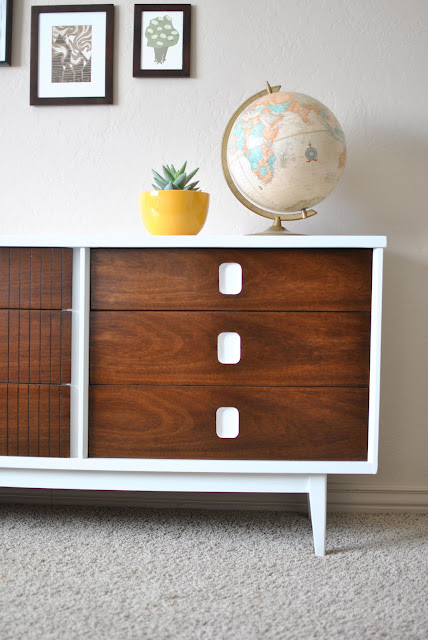 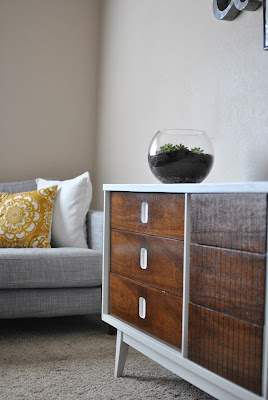 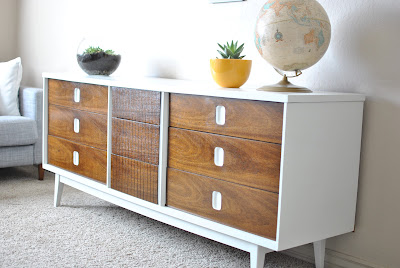 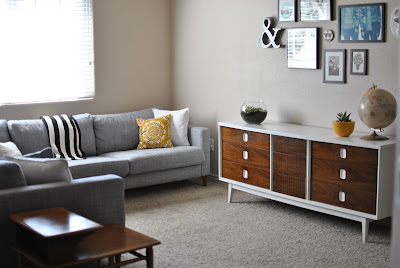 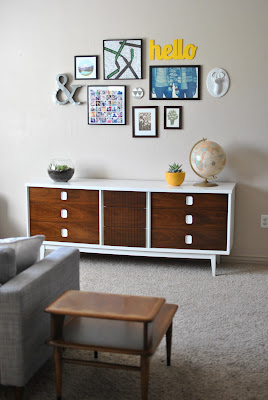 I still can't believe how much I like this piece. Hooray for a project that actually turned out.

And we love our Karlstad sectional. We just bought it a couple of months ago and it's perfect for us. We even added new tapered legs, custom made by Uncle Bob's Workshop. They screw right into the old holes without having to install mounting plates. 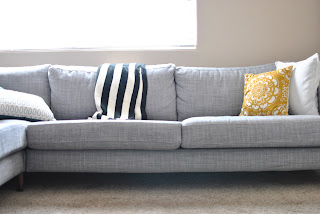 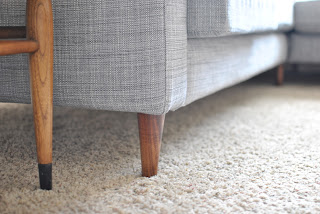 And lastly, I need decorating help people. I bought this chair at the antique mall several months ago and I am agonizing over choosing a fabric to reupholster the cushions! I cannot seem to find something that jumps out at me as perfect. I'm not good at decorating. I'm much better at looking at other people's choices and getting inspiration. I just don't know what color or pattern to choose that is under or around $20-ish a yard. The few fabrics I have found that I really like end up with me saying "THIS IS THE ONEEE -- oh... $80 a yard..."

So... if anyone even reads this post (which really isn't likely) and has an idea (that would still match the rest of our living room as shown in the photos above)... please share! 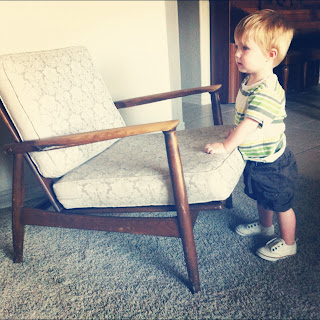 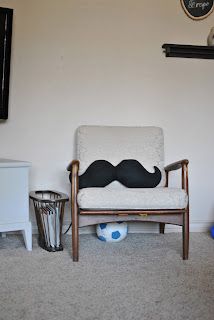 Have you looked at the fabric store by the AMC theater on Stapley? I got the fabric I used on my couch there for $2 a yard!

What about a yellow/mustard to match your pillow, hello sign & pot on the credenza? I think either a solid or a large pattern like a chevron would really make the chair pop. Maybe something like this? http://www.hawthornethreads.com/fabric/designer/dear_stella_house_designer/bukhara/floral_in_yellow

Sorry I don't have a fabric suggestion, but I love your new look to the living room!!! Incredible job on the re-do and those couches are darling! PS I like the wall decor, too. It's wonderful! Good luck with the chair. :)

Couch looks great! What wood and finish did u choose for the legs?

Well I'm not sure this will notify whoever asked about the finish, but I believe we did the Uncle Bob's "Medium Brown" finish.

Hi, do you remember what type of wood the Karlstad Sofa legs you bought are made of?

The legs are Poplar (no extra charge). They've held up great!

How weird..I was googling restaining veneer and came across this post. I am going to restain a mid-century piece...a Lane coffee table..and I see that you also.have a Lane Acclaim side table. THEN I see we have the same sofa, sofa legs, and wall and carpet colors. We should have been sisters lol. Now I just need one of those great dressers!